The Something Really Great Jar 2013

The Something Really Great Jar 2013 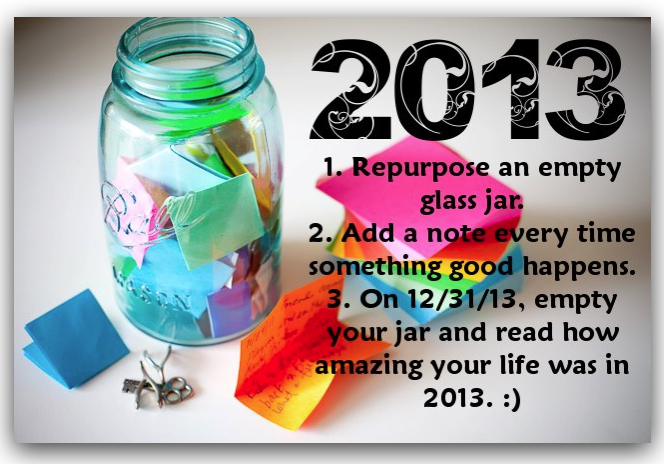 This time of year we’re all thinking about resolutions the things we’re going to do – a little bit of everything, it seems. With all that DOing sometimes I think we miss what is actually happening around us! While waiting for that miracle to walk through the front door…it crawls through the back window and if it doesn’t bite us in the behind….we miss it! 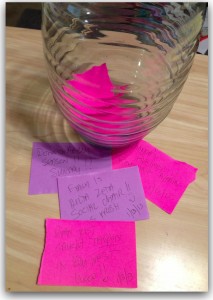 I saw this on Facebook | thanks Groovy Green Glass! I call it the Something Really Great Jar….each time something really great happens in your life jot it down and drop it in the jar*. Then at the end of 2013 (or anytime) read the notes to see just how great your year has been! *and yes when you fill the jar start another and another!

So instead of beating ourselves up for the things we don’t accomplish – how about we recognize and cherish the great things that do happen. Here is a picture my jar...it didn’t take long to come with several great things and that’s just today!

I’d love to see your JAR just post a picture on our South of Southpark Facebook Wall http://www.facebook.com/SouthOfSouthPark

With his back against the San Francisco traffic,
On the bridge’s side that faces towards the jail,
Setting out to join a demographic,
He hoists his first leg up over the rail.
A phone call’s made, police cars show up quickly.
The sergeant slams his passenger door.
He says, ‘Hey son, why don’t you talk through this with me,
Just tell me what you’re doing it for.’
Oh it’s a little bit of everything,
It’s the mountains, it’s the fog,
It’s the news at six o’clock, it’s the death of my first dog.
It’s the angels up above me, it’s the song that they don’t sing,
It’s a little bit of everything.
There’s an older man who stands in a buffet line,
He is smiling and he is holding out his plate.
And the further he looks back into his timeline,
That hard road always led him to today.
Making up for when his bright future had left him,
Making up for the fact that his only son is gone,
And letting everything out once his server asks him,
‘Have you figured out yet what it is you want?’
I want a little bit of everything,
The biscuits and the beans,
Whatever helps me to forget about the things that brought me to my knees.
So pile on those mashed potatoes, and an extra chicken wing,
I’m having a little bit of everything.
Somewhere a pretty girl is writing invitations
To a wedding she has scheduled for the fall.
Her man says ‘Baby, can I make an observation?’
‘You don’t seem to be having any fun at all.’
She says ‘you just worry about your groomsmen and your shirt size,
And rest assured that this is making me feel good.’
I think that love is so much easier than you realize,
If you can give yourself to someone then you should.
‘Cause it’s a little bit of everything,
The way you joke, the way you ache,
It is getting up before you so I can watch you as you wake,
So in that day in late September, it’s not some stupid little ring,
I’m getting a little bit of everything.’
Oh it’s a little bit of everything,
It’s the matador and the bull,
It’s the suggested daily dosage, it is the red moon when it’s full.
All these psychics and these doctors,
They’re all right and they’re all wrong,
It’s like trying to make out every word when they should simply hum along.
It’s not some message written in the dark,
Or some truth that no one’s seen,

It’s a little bit of everything.